You are missing something, or have a cool idea for us ? Tell us here !

Just trying to think of a simple way to implement this idea that will be easy to understand for all the pilots.

How about if we add to the fuel loading page another box for 'Planned Fuel Reserve' or something like that, which will default to estimated fuel for half an hour of flying, or 20% whichever is less. Then when it could use that when it does the math on the payload page. Basically if MLW - reserve is less than MZFW then that number will be used instead when figuring max payload.

As to when, I don't want to make any promises, I am about to go on a two week trip so not during that time. Finding time to work on the client is the hardest as I can usually only do that on the weekend and SWMBO usually finds some way to fill the time. I can work on the website on the train when travelling into the city for work, but I still haven't found time to figure out how to make the X-Plane for mac client work.

This of course is much simpler that figuring out how to do that. I have gone through the database and ensured that every aircraft where the MLW is less than the MTOW that its greater than the MZFW.

Ah just throwing out ideas, no time frame required .... We appreciate all you do and thank you!!!

I had a brain wave on this subject, I was flying a DC-3 around and the way its setup the cargo limit is the limit with no passengers, but with passengers and you basically have to reduce the amount of cargo by a kg for every kg of fuel you take on. But as I thought about it, in a passenger aircraft cargo would be limited by the size of the baggage compartment, so why not give the ability to limit cargo in the seat configuration screen, airlines would still have full control of it. Does anyone think this would help the problem we were discussing?

Another member send me a message about this topic that I thought was worth sharing, so I am reposting it here.


I am writing to you, in the opportunity to explain myself better in relation to your CLIENT.

Yesterday I sent you a cancellation report of a flight made by me, that flight was the VIA421A from MKJP to SVMI and that it gave the result of: "Exceeded maximum landing weight", it is not the first, and I remember have told you that: the CLIENT who manages to read the lights on or off for the takeoff or landing, above or below 10,000 FT, exceed the speed of 250kts, the vertical speed to landing, and other things, but that; it is not capable of reading or detecting the true zero-fuel weight with which we load our airplanes. "I'm also clear on some modifications made to the CLIENT."

When we make a reservation in your system, it returns us the information of how many passengers, baggage and cargo of payment we should embark on that flight and that is how we try to adjust our flight to that data and achieve to be within those parameters and comply with the assignment.

But that does not work in all cases, for reasons of track lengths, temperatures, obstacles in the area, restrictions on noise emission that forces an aircraft and its command crew to make weight and power adjustments, etc ... just in the zero fuel weight (0), that is, we cannot take off with the MZFW and we must lower what is necessary to adjust to that operational moment.
Your system does not allow this, so, I have reduced the weight of passengers, luggage or cargo, your CLIET will continue taking the MZFW or ZFW weight that indicates the reservation and as an example I put the flight I made today, the: VIA023 Oct 28, 23:00, from SVMI to SVMC in a B739, this flight gave excellent results but the interesting thing is that I did it without passengers and without cargo, that is, empty plane, only the fuel on board and yet the final report of the flight says that I took: 174 passengers, their luggage plus the cargo.

With this I mean that: your CLIENT, does not read, does not detect the real ZFW so we load our plane, that is, your CLIENT is blind in that aspect and at the end we are making a flight only with the data that your system provides at the moment of the reservation and not, as we really are doing.

Hoping that in this opportunity it manages to make me understand what I really want to express, that is; that make your client; read, detect or determine the true weight ZFW or MZFW that we have on board at the time of the flight to have a greater reality.

Thanks for your attention.

There always has been a problem with the current system loading to max zero fuel weight with the pilot having no way to remove cargo other than to get down to MTOW. This has caused many "exceeded max landing weight" advisories as the max landing weight on some aircraft in FSA are set so you would have to land literally on fumes.

It seems the easiest solution would be to make the "change" tab in the client available so the pilot can adjust their payload according to needs and bump either passengers or cargo as they see fit. In other words, the client still loads to the seating chart and maxes out available cargo space to meet ZFW, then the pilot could reduce those numbers with the change tabs in the client during pre flight.

Not all airlines allow their pilots access to the seating layouts, so to adjust daily flights using the seat chart could turn into a hassle for some operators.

We could always allow it when booking the flight or even a screen where after booking where the cargo and passengers can be limited.

As I was thinking about this another idea occurred to me, when a pilot cancels a flight they can be charged a fee to compensate the passengers whose flight was cancelled, but if when loading an aircraft passengers are bumped to save weight, no compensation is offered.

A cordial greeting to all my colleagues of FSairlines.

This is a subject to which we must pay close attention, since the Maximum Structural Weights of each aircraft are very different from the operational weights.

It is understood that the structural maximum weights are essentially the maximum design weights of the aircraft, which can support its structure and of course the operational weights are those that influence the operation of aircraft directly, therefore, all the Aircraft operations will always be limited to the conditions of:

1. Altitude or elevation of the airport.
2. Runway or runway length, both for takeoff and for landing.
3. Ambient temperature.
4. Wet, dry or snowy track.
5. Type of tires installed on the aircraft.
6. Power or thrust of the turbines.
7. Obstacles in the area.
8. Etc ...

All these variables, force us to act with great caution when operating an aircraft so that it is within the best parameters. The most important weights when preparing the operation of an aircraft are:

We can be fair, without overweight with the MZFW and the MTOW, but we can have overweight in the MLW, and that is the most serious problem, since, in the landing we could have serious and severe consequences and this is where we should have the most attention.

The aero commercial philosophy in the aspect on what weight should be reduced for passenger aircraft is the following:

Normally with the (1) reduction of the load, it is enough to get down the weight necessary for our operation, (2) reducing the luggage is one of the most difficult decisions that a flight dispatcher must assume, since the passenger will arrive at your destination and not the luggage carries your costs, but the baggage and cargo can continue on the next flight that exists for that destination and easier if the company also has cargo aircraft and perform the same route and (3) Reduce or lower passengers, is the most critical and economically hard to take, since it implies the responsibility of the company in having to locate the passenger on the next flight of the same airline or locate it on a flight of another airline which of course implies transfer the value of the ticket to that airline and finally have to assume the costs of transportation and lodging of the passengers left on the ground.

For this reason, the flight dispatchers, we perform the respective calculations for each flight and we must take into account the following:

1. The aircraft, the one that is programmed to make the route and that will never be the same, usually varies by infinity of reasons.
2. Having confirmation of the aircraft to use, we must then verify in the route and track manuals and according to the climatic conditions and altitude of our runway, we will review the tables for takeoffs and landings, in order to determine which will be the maximum weight that we can embark on the aircraft.
3. Carry out the manual calculations or automatically of the respective dispatch sheet and flight release; Example: 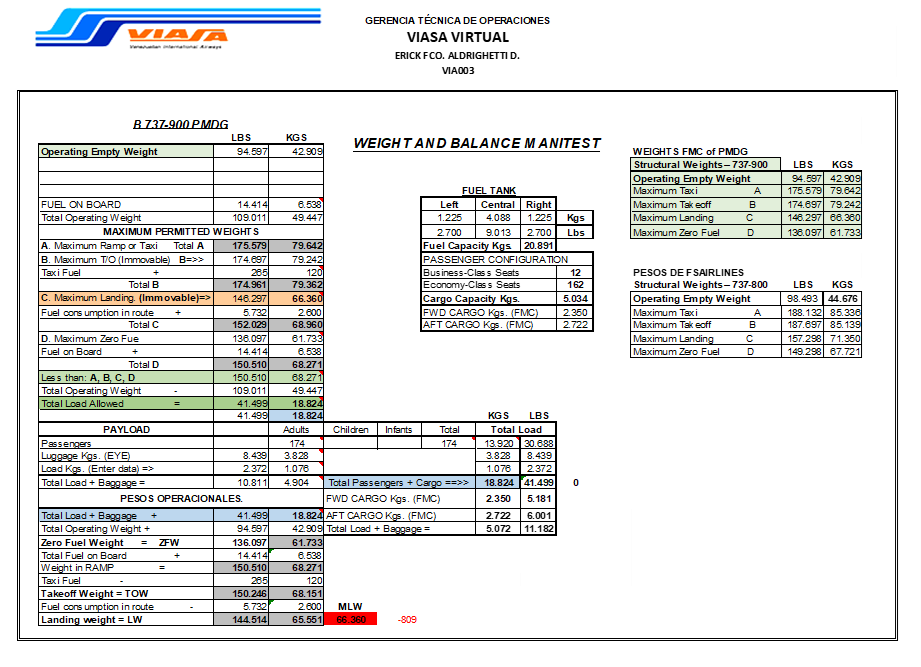 
As you can see in this example image, you can see that you could only ship 1,076Kgs of the cargo that appeared in a reservation from SVMI to SVMC of 5,297Kgs, more, however, (having made the flight, but with zero passengers, luggage and load, that is, the empty plane, only with the fuel) the Fsairlines system report reflected: that he had made the flight with the 174 passengers his luggage plus the cargo and gave some great results and this is because the CLIENT, it does not read, it does not detect, it is blind to determine the true ZFW that we have in our aircraft. We can all fly with empty planes, only with fuel on board and the Fsairlines system will give us excellent results because it only assumes what is detailed in the reservation
It is easier to correct or add this function to the CLIENT of the Fsairlines, than to allow each of the Virtual airlines to edit and configure our aircraft according to the type of operation we carry out in our area, whether it is National or International, I mean: real life, each airline requests manufacturers an aircraft with a passenger configuration defined by its type of operation, as I said before - National or International - therefore not all B739 aircraft have the same weight, including the same engines, may have yes, the same structural but not the operational weights, mainly the Operating Weight and that is the Weight of the aircraft, with engine oils, hydraulic fluid, water, emergency equipment, carpets, seats plus 2 pilots, 3 to 5 flight attendants and their respective luggage, etc .. and that's what we call it in aviation Operating weight, or it's also called DOW; OEW.

In conclusion, in order not to lengthen the issue further, it is necessary that you modify the CLIENT, that it can read what we have actually loaded on board or just activate the button (Change) in the line of weight that the CLIENT already has.